Academic research is a deep vein of insights for business. The best research inspires further academic inquiry, and as the new ideas move into the practice of business via the popular press, textbooks, classrooms and executive education, research proves itself a well-spring of innovation.

In June, the Journal of Service Research (JSR) was ranked No. 4 among all business journals, based on the number of times its articles had been cited in subsequent scholarship over a two-year period. That means the JSR is not only a source of the best original work—it also contributes building blocks for the formation of future ground-breaking ideas.

The news came just as Center for Services Leadership Director Mary Jo Bitner was wrapping up four years as editor of the journal. “This is the role of relevant, academic research: to focus on new, important topics and develop new knowledge around those topics,” Bitner said.

According to the ranking, JSR articles were cited by other scholars an average of 6.8 times in 2014 and 2015, a jump of about 4 points for the period that Bitner was at the helm. Citations — the number of times the paper is cited by others, post-publication—are an important measure of the influence of a particular piece of research. Only three other business journals, all of them more general in content, collected more citations. That means JSR is one of the most influential journals around right now. 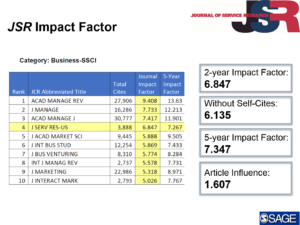 The high marks are testament to the quality of the work published in JSR—its rigor and relevance.
Bitner was only the fourth editor of JSR, which was founded 1998 to provide a U.S.-based research journal focused on service. As a young researcher, she was one of the first to explore new ideas and theories for managing service organizations. Many of the ideas first published by her and other academic service researchers on concepts such as service quality, customer satisfaction, service encounters, self-service, servitization, co-production and others are now widely used by managers to build value for customers and profit for their firms.

As research flourished, it became clear that service was relevant to all enterprises and all parts of the firm, and by the time JSR was founded, the need for a cross-disciplinary journal reflecting the ubiquity of service in the economy was evident.

The quarterly JSR has benefitted from strong leadership from its inception, starting with founding editor Professor Roland Rust and followed by Professors Parsu Parasuraman and Katherine Lemon. Bitner was no exception. During her tenure, she instituted a multi-step review process executed by associate editors chosen from among the leaders of the discipline. The review process yields a set of detailed critiques for every article considered for publication, even those that eventually do not make the cut. This deep vetting insures that the strongest research gets published: no surprise that other researchers cite the work in downstream papers. But it also helps researchers become better at what they do.

As a result, Bitner said, JSR has a reputation for being developmental. She routinely received letters from authors whose papers were accepted after several rounds, thanking her for the constructive reviews that helped them improve. And, she even received thank you letters from authors whose papers were rejected, noting how their work was stronger thanks to the process and the detailed reviews.

“It makes sense – it is the Journal of Service Research,” she said. “In a way, we were providing a service to authors, and by being constructive we were helping to build the field.” Bitner explains that a number of factors drove the rise in citations. Service is now a defining characteristic of the U.S. economy, and as such is the focus of a lot of research and special sections in other journals. If a paper is about service it is likely to cite a JSR article. Many, including a paper led by W. P. Carey Marketing Professor Amy Ostrom about research priorities in the field, are among the most frequently cited in the discipline.

Michael Brady of Florida State University took the reins as editor on June 1. “The journal is in great hands with Mike,” Bitner said. The transition has enabled her to shift focus back to her own research, on branded service and on authenticity as it relates to employees, brands and customer expectations. The National Customer Rage Study, produced by the Center for Services Leadership in partnership with Customer Care Measurement & Consulting, will also occupy her time this fall.

Bitner also was honored this summer with the 2017 Gronroos Service Research Award, also awarded to her colleague, Professor Emeritus Stephen Brown—partners in founding the Center for Services Leadership.

Professor Mary Jo Bitner will be a featured presenter at the upcoming Strategic Service Institute, September 11-15, 2017 at the W. P. Carey School of Business. Visit wpcarey.asu.edu/institute for more information and details.