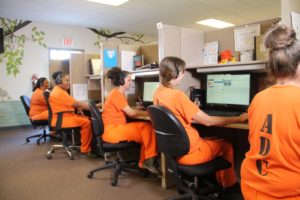 The current historically low employment rate may signal a strong economy, but managers and HR professionals know that there is a flip side: a growing shortage of talent to fill available jobs. According to the Society for Human Resource Management (SHRM), companies are trying to fill 7 million jobs right now, but only 6.3 million people are looking for work.

But despite demand, nearly three-quarters of a million men and women every year enter the job market and struggle to find work. After 12 months, 75 percent of them will be unable to land a job. The reason is not their qualifications or their ability to be trained. It is their criminal history. Some 700,000 people are released annually from the nation’s prisons, only to discover that even though they served their time, the job market continues to convict them. And unemployment is a leading cause of recidivism.

With 20 to 25 percent of the world’s incarcerated, the United States also has grown a large population with past felony convictions: 23 million. Experts estimate that one in three Americans has a criminal record.

Traditionally this population has been viewed with mistrust, but a growing movement sees these people as an untapped resource, an opportunity.

Impact sourcing describes business practices that build inclusion for groups like the formerly incarcerated. Research shows that workers from these groups, given training and support, are loyal and hard-working, and no more likely to create problems on the job than the general population. Companies benefit, as do their customers, who increasingly support businesses that have embraced social responsibility.

Michelle Cirocco is chief responsibility officer at Televerde and a member of the Center for Services Leadership board. The spring board meeting was held at Perryville Prison west of Phoenix, where Televerde operates a call center staffed by female inmates.

Televerde, founded 25 years ago, provides job training and opportunities to incarcerated women. Today, the company operates a call center at a prison in Rockville Indiana in addition to Perryville where incarcerated women provide business-to-business sales and marketing support, creating demand for companies in the high tech sector. Inmates at both prisons gain work experience in every functional area of the company, and receive help finding jobs upon release. Recidivism among these women is around 7 percent, compared to 40-60 percent to 7 percent in the general population.

A GISC member company, Televerde has accepted the challenge and committed to creating 450 jobs throughout its operation globally, Cirocco said.

SHRM, in partnership with Koch Industries, has launched its own pledge program to challenge companies to hire former inmates. Companies are asked to sign a pledge to “give opportunities to qualified people with a criminal record, deserving of a second chance.” Signing the pledge opens access to a toolkit that provides “information and tools needed to confidently evaluate applicant criminal records, reduce legal liability and increase inclusive hiring from this untapped labor pool.”

Getting Talent Back to Work

Sign up to receive the latest news and updates from the CSL just for service leaders.