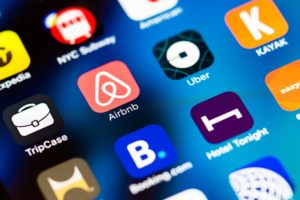 In the past decade, few industries have grown as much as the sharing economy services (SESs) industry. SESs use cloud-based technology to match customers with providers that offer services such as house rentals, car rides and labor tasks. Some of the more popular SESs include Uber, Lyft, and Airbnb. Technological advances have helped lead to SESs explosive growth in the marketplace but SESs are not operating without challenges. According to the Associated Press, in 2017 Uber lost $4.5 billion on a gross revenue of $37 billion.

A recent issue of California Management Review focused on studying 53 SES companies and examining the successes and failures they experienced. First, the researchers framed SESs as service triads which means “the end customer contracts with an intermediary firm but the service is provided to the end customer by a subcontractor of the intermediary firm (such as a homeowner willing to rent a room in the case of Airbnb).”

Researchers then broke up SESs into three categories based on the resource they offer customers: physical assets (e.g. Airbnb), labor (e.g. HomeAdvisor), and physical assets and labor combined (e.g. Uber). Of the 53 SES companies studied, 10 companies failed leaving 43 still operating at the time of the case study. “Studying both types of companies allowed us to better understand the plausible reasons behind the successes and failures of SES companies.” the researchers wrote.

There are many significant challenges facing the sharing economy and researchers identified three common issues:

Since SESs do not offer neither products nor services of their own, managers in these companies face unique challenges. The aforementioned issue of Uber spending large sums on marketing has led to its rapid growth to over 60 cities around the world but this had also led to continued and significant losses. Therefore, managing growth is critical. “SES companies are well-advised to take calculated, measured steps in growing their businesses versus burning large amounts of capital to grow very rapidly in service markets where multiple platforms are likely to survive.”

Researchers also recommend SES managers develop a reliable set of suppliers for the service they plan on providing. “The next step is to then focus on attracting the right customers for these suppliers.”

To keep the sharing going, read the full article at the California Management Review. (A fee may apply.)