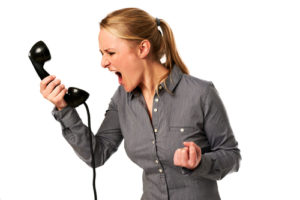 In one episode of the hit sitcom Seinfeld, Jerry’s car gets stolen so he must use a rental car in the meantime. As is typical for the show, another hilarious service failure ensues as the rental car agency employee informs Jerry that, despite his reservation, they were out of midsize cars. The side-splitting response from Jerry (what brought home 10 Primetime Emmy Awards for this show) is a comical explanation of how the agency does not know how to hold a reservation and that “anybody can just take them.” He received no financial compensation but did depart with a car, albeit a smaller one than he desired, and quickly said yes to the offer of car insurance because he was “gonna beat the hell out of this thing.” While Jerry’s response was humorous in nature, it was a shining example of what service industry researchers have begun studying recently: how the intensity of a customer’s anger affects the amount of compensation after a service failure.

A recent research article, published in the Journal of Service Research, featured four studies that examined the impact of customer anger intensity on compensation. The researchers chose to focus on the cultural aspect of power distance (PD) of service employees as the potential moderator between anger intensity and customer compensation. According to researchers, power distance refers to “the degree to which individuals, groups, or societies accept inequalities between people as unavoidable, legitimate, or functional.” That level of acceptance shapes cultural views about how people should behave and interact.

The purpose of Study 2 was to identify if PD moderates customer anger on compensation. 68 business school students in Singapore (high-PD) and 92 business school students in Israel (low-PD). A simulated customer service environment was given to participants in which they had up to $5,520 still available for compensation and they then read a scenario describing a customer complaint, which was either of high or low intensity. Participants were then tasked with writing a note and specifying the compensation amount. “In the low-PD culture (Israel), higher anger intensity was compensated significantly more than lower anger intensity.” The opposite was true for the high-PD culture (Singapore).

“Our research suggests that firms would directly benefit from providing emotion management training to employees to reduce the degree to which employees perceive customer anger as threatening and to help employees judge the inappropriateness of displayed anger in a nuanced manner.”

To read the full article go to the Journal of Service Research. (A fee may apply.)