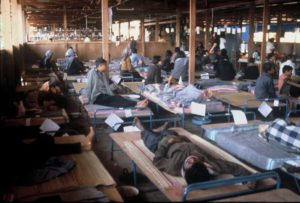 –Written by Jack Lechich for the Center for Services Leadership

According to the UN Refugee Agency, in 2019 there were 70.8 million people forcibly displaced worldwide. 25.9 million of these people, over half of whom are under the age of 18, were forced to become refugees and that number is only growing. Refugees often face a litany of challenges including language barriers, finding employment and gaining access to basic services such as health care or banking services. While some of these challenges are a direct cause of government laws, policies, interventions, etc., one might be surprised to know that many of these challenges are brought on or made worse by service employee sabotage. Sabotage in a service setting is defined as “organizational member behaviors that are intentionally designed to negatively affect service.” But why are some employees sabotaging their interactions with refugees in service settings?

To prelude the following study, some examples of employees sabotaging service encounters include teachers refusing to teach refugees, nurses and/or doctors making refugees wait longer for treatment or not treating them at all, and bank tellers making it unnecessarily difficult for refugees to open accounts.

Being host to 3.7 million refugees (the most by any host country), Turkey was the country of focus in an article recently published in the Journal of Services Marketing. Of the 6.7 million Syrian refugees (the most from any country), 3.5 million have gone to Turkey. Therefore, the researcher chose to focus on Turkish service employees for the study conducted. After gaining access to 12 heavily Turkish Facebook groups that had threads centered around refugees, he monitored all comments made about refugees to classify them as either positive or negative comments and then verified if they came from people working in service-related jobs. To ensure a larger data sample, he also scanned the website homepages of three major Turkish newspapers for Syrian-refugee related news. He then analyzed and pulled comments from these websites.

The analysis’ most frequently mentioned theme was perceived scarcity of resources (38%) which was broken down into two areas of concern. The first area of concern is that refugees are using the already stretched-thin economic and financial resources of Turkey. For example, unemployment in Turkey is already high so there is great concern that integrating more Syrian refugees into the economy would hurt the Turkish people as they suspect refugees of accepting lower wages. The second area of concern is the direct effect that refugees have on employees and organizations. Hospitals and classrooms are often overcrowded in Turkey and the extra resources allotted to take care of the Syrian refugees has left many Turkish people upset.

The second most frequently mentioned theme was perceived unfairness (31%). The main issue of concern for this theme is economic unfairness which centers around the fact that refugees are using services that they do not pay for but instead are provided from the locals’ tax dollars. This would not be as big an issue to some locals if they were given priority over refugees when they received said services but this is not always the case. Here is an example of this perceived unfairness from one of the comments observed during the study:

“We have millions of poor people in this country. Those people live in poverty and yet we are feeding those Syrians with our own taxes. Not fair! So I do not feel bad if they need to go extra steps to open an account in our bank. They should be thankful for the opportunity instead of complaining that they need to do extra paperwork (Bank teller, 44, male, Istanbul).”

The researcher uncovered three more themes that employees use to justify service sabotage and if you want to find out more about them go to the Journal of Services Marketing at this link. (A fee may apply.)